Do you dream of traveling to space? If you lament the fact that you can’t hop in a rocket and travel the solar system, you may want to plan a shorter jaunt to one of these incredible destinations on planet Earth.

We live in a world of great geological and ecological diversity, and right here at home you’ll be amazed at some of the bizarre landscapes there are to explore. These landscapes look so alien you’ll think that you’ve traveled to another world! This is the largest salt flat on the planet, measuring 10,582 square kilometers. About half of the lithium on the planet is stored in this salt flat. During the dry season, the white, cracked ground extends into the distance, looking impressively alien. During the wet season, the basin fills. The shallow water stretches to the horizon, amazingly flat and reflective—like a huge liquid mirror. This is the largest uninhabited island on the planet. It looks quite convincingly alien, not so much because it appears unusual, but because the stark scenery closely resembles the familiar geology of the planet Mars. Because of its similarity to certain areas of Mars, scientists have used it as a testing location for Mars rovers. Yellowstone National Park is among the most famous parklands in the world, drawing droves of visitors from around the globe each year. As the active caldera of a tremendous super volcano, it houses some spectacularly unusual vistas. Visitors travel here to watch erupting geysers and explore colorful acidic hot springs. The terrain is delicate—and dangerous—but walkways make much of it accessible. This is another hot spring destination featuring vibrant bright blue terraced pools of water in an alpine environment. The colors of the pools stand out strikingly from the surroundings and offer a beautiful parkland to explore.

Valley of the Moon, Argentina Valle de la Luna in San Juan Province in Argentina is a remarkable place. You can only explore it on a guided tour. There are a number of odd rock formations in the area, which by themselves are interesting, and there are the bochas. Bochas are stones of varying sizes found throughout central and South America. Many specimens are perfectly spherical. Those in the Valley of the Moon are not, but are still quite startling to behold, and they are quite numerous. Nobody is entirely sure as to the origin of the bochas.

On that note, there is another valley which shares a similar name, Vale da Lua (Moon Valley) in Brazil, which is also worth a look. It contains some of the most ancient rock formations on planet Earth. They are quite out of the ordinary thanks to unusual fluvial erosion. Death Valley in Nevada stretches into California, and offers a breathtakingly huge empty landscape to explore. The sheer scale of the park by itself is daunting, as is its forbidding sense of isolation. Here visitors can explore a number of unusual geological features. Salt flats and rock formations offer intriguing vistas, and some parts of Death Valley are actually located below sea level.

To add to the oddness, scientists have discovered mysterious rocks they call the “Sailing Stones of Death Valley.” These rocks appear to move all by themselves, leaving a trail behind them which reveals the pathways they have taken. This is a major unsolved scientific mystery. Socotra in Yemen is a very odd looking place, with characteristic orange stone and an astonishing diversity of flora and fauna, including hundreds of species found nowhere else on the planet. Most striking is the Socotra dragon blood tree.

The dark red resin has a distinct aroma which makes it popular in perfumes and soaps. It is also used in paints and varnishes for its color. The tree itself has a dense “umbrella” structure of branches which is nearly flat on top. A grove of these trees looks like a child’s fanciful dream of trees—and if you didn’t know they were real, you would probably assume they were artistically rendered. This river has a distinct red color because of human intervention in the area. As a source of iron, the surrounding area has been mined since 3000 BC. Iron has dissolved into the water and stained it red, also making it very acidic. Now only extremophile bacteria can survive in the water. This place is known as the “Spotted Lake,” located in British Columbia. A number of minerals have been crystallized inside its waters, including magnesium sulphate, calcium, and sodium sulphates. Silver, titanium, and a number of other minerals are also present in smaller quantities. The result is a number of “spots” of water surrounded by white rims. China is renowned for its karst limestone formations. Some of the most extraordinary are located in an area called Shilin, which translates to “Stone Forest.” The karst formations here are the result of fluvial erosion. It has long been known as the “First Wonder of the World” in China. To understand how this region gets its name, take a look at a photo taken from overhead. It really does appear to be a forest of coniferous trees turned suddenly to stone at first glance. 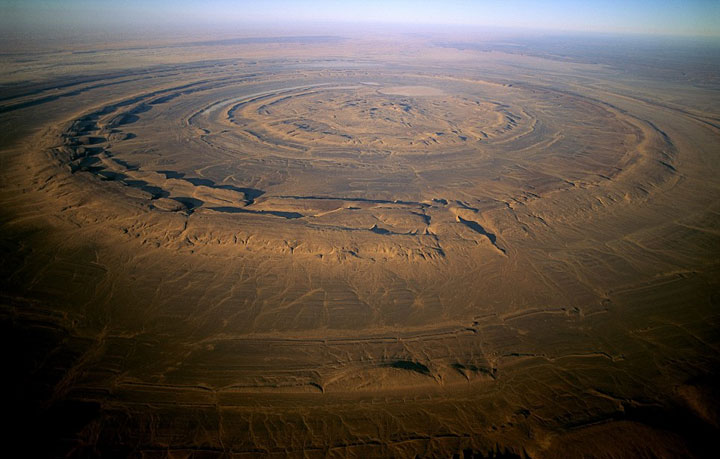 Structure Richat also called “the eye of Africa” is located in Mauritania and has long remained an enigma. Right in the middle of the Sahara Desert, it has a diameter of 50 km and is fully visible from space. It is actually the result of a giant volcanic phenomenon that is 100 million years old. 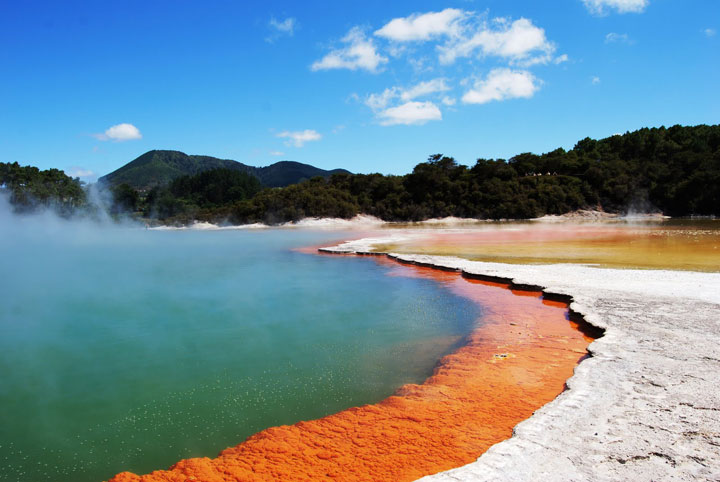 It is a natural volcanic pit where water has unreal colors. In reality, there are certain materials that give these particular colors to water:  sulfur gives yellow, antimony gives orange, alum gives brown and ferrous salt gives green colour to water.

If you have always longed to travel to distant worlds, you may find any one of these destinations offers you the next best thing.

Each of these locations is one-of-a-kind, startling to behold, and even more fascinating when understood geologically and ecologically.

Each exhibits the diversity of planet Earth, and showcases astounding possibilities. Our own planet is much more varied and unusual than most of us realize each day as we look around at our own familiar surroundings.

Photographed from afar, our planet may be a featureless pale blue dot, but we are very privileged to be able to ride through space on this spaceship Earth and explore its rich features!

Migrants in the port of Malaga