Al-Tohaita, Yemen – In a shantytown in a deserted area of Yemen’s al-Tohaita district, six-year-old Ahmed Abdullah Ali and his 13 siblings often go to sleep hungry.

The effects of malnutrition have been the most dramatic on young Ahmed, whose small, frail body looks much younger than his age.

“I get 500 Yemeni rials [$2] per day, and I have 14 children, so I can hardly provide them with bread, tea and goat’s milk to drink,” the boy’s father, Abdullah Ali, told Al Jazeera.

“They are suffering from malnutrition. Always, they need food.”

Many residents of this sparsely populated area, located in the western Hodeidah province, earn some income by breeding animals, but it is not enough to make a living. 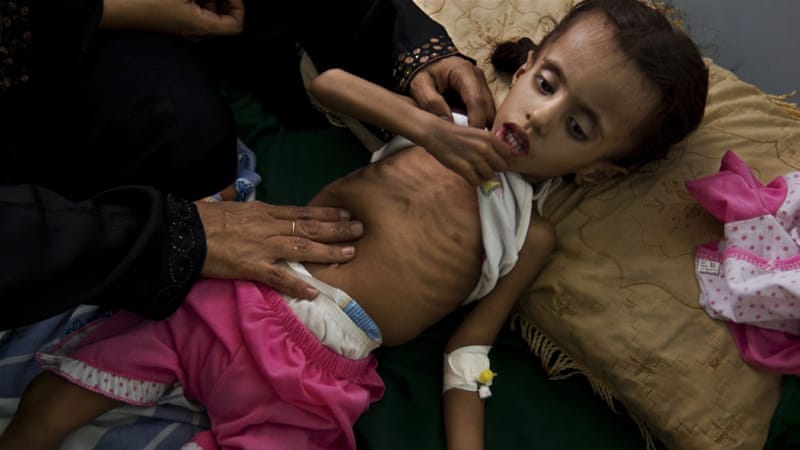 About an hour’s drive from the main road, many residents in this area of Tohaita are uneducated and illiterate, with large families to support. Although residents told Al Jazeera that they had received some support from aid groups in the past, including food and mattresses, such assistance has largely dried up amid Yemen’s ongoing war.

“During the last two years, we did not receive any aid … I do not need anything more than food for my children, who are starving to death,” Ali said.

According to the World Food Programme, about 14 million people – more than half of Yemen’s population – have become food insecure, while thousands more have died, and more than 1.5 million have been displaced by the conflict.

In Tohaita’s shantytowns, most people cannot afford to buy even the basics, such as vegetables, fruit and milk, residents told Al Jazeera.

Read More – Who Will Save Middle East Christians: Obama or Putin?

Throughout Yemen, at least 370,000 children were suffering from severe acute malnutrition as of August, said Mohammed Al-Asaadi, a spokesman with the UN children’s fund, UNICEF, in Yemen.

“We’re talking about a 50 percent increase compared to the number we had earlier this year … UNICEF has deployed four mobile teams, which detected over 150 cases of severely acute malnourished children in the past week,” Asaadi told Al Jazeera. “Screening of children is ongoing as the detected children receive necessary treatment.”

Meet The 12-Year-Old Girl Who Silenced The World For 5 Minutes | Voice Of People Today https://t.co/YagsxJukpk

He confirmed that food insecurity due to poverty, unemployment and a lack of awareness of proper nutrition practices for children had been compounded by a lack of access to healthcare facilities.

Countrywide, 600 health centres and 113 nutritional treatment sites have been rendered non-functional due to the security situation or a lack of supplies or fuel, Assadi said.

Thousands of Yemeni children are believed to have died last year from preventable diseases, he added.

“It is difficult for me to take my children to Hodeidah city, so they have to face their destiny in this desert. The solution is not in my hands.”

In the shantytowns of Tohaita, residents live in unsanitary conditions without indoor plumbing. It takes two hours for them to bring clean water, transporting it via donkeys. Basic services, such as hospitals and schools, are unavailable here.

Over the past year, some children in the area have contracted scabies, a skin disease marked by itching and red spots. Maha Mohammed Salem, aged eight, has been suffering from the disease for two months.

Her unemployed father relies on milk from his five goats and the charity of neighbours to feed Maha and her 11 siblings.

“I know this disease can transmit to my siblings, so I’ve been trying to remain far from them during the day,” Maha told Al Jazeera. “But at night, we sleep in the same shanty, so the disease has spread to my one-year-old brother … I heard there are hospitals in Hodeidah City that are treating children with scabies, but we do not have money to go there.”

As she speaks, Maha applies baby powder to the rash on her small brother, Omar, to help alleviate his itching.

“It is difficult for me to take my children to Hodeidah city, so they have to face their destiny in this desert,” Maha’s father, Mohammed, told Al Jazeera.

“The solution is not in my hands.”

According to Stephen O’Brien, the UN’s emergency relief coordinator, the situation throughout Hodeidah has grown dire.

“The quantities of food, medicine and fuel entering the country are way below the needs and must be increased as a matter of urgency,” O’Brien told a news conference after a three-day visit to Hodeida City last week.

O’Brien warned that while the UN has increased its humanitarian assistance to Yemen since April 2015 – reaching four million people in need – its programme is only 46 percent funded and has a deficit of $880m.

Ahlam Abdul Rahim, a social activist in Hodeidah, said that international organisations must do more to reach people in some of the province’s sparsely populated areas. Pregnant women and children are the main target of omicron, experts say Will the United States go into conflict in the Middle East? Zarif: Sending US troops to the Middle East is a “very serious issue for international peace” Iran: Sending US troops to the Middle East is a “very serious issue for international peace”

Trump: We’ll send about 1,500 additional troops to the Middle East US will additionally send about 1,500 military to the Middle East